Our chemistry is devoted to the design, synthesis and characterization of innovative probes based on metal complexes for applications in magnetic resonance imaging. We apply coordination chemistry concepts to create molecular MR imaging probes. We are also interested in fundamental aspects, such as optimizing complex stability, kinetic inertness and understanding MRI efficiency of paramagnetic systems. We cover various steps of probe development: (i) design and synthesis of novel ligands, (ii) full physico-chemical characterization of the complexes, involving the determination of individual microscopic parameters that govern relaxivity or chemical exchange saturation transfer (CEST), (iii) assessment of stability and kinetic inertness related to in vivo toxicity, (iv) in vitro/in vivo evaluation of the agents. 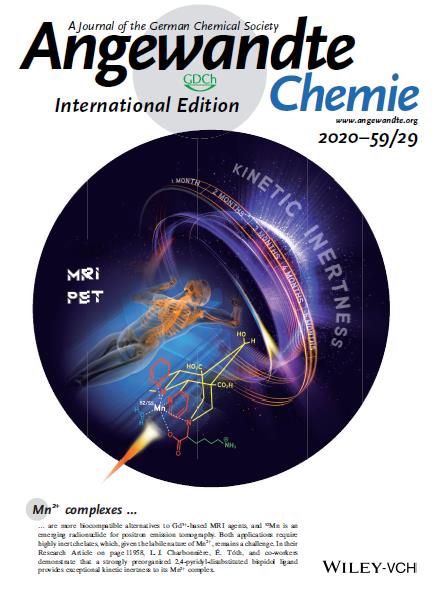 Smart MRI contrast agents for Zn2+ detection. Gd3+ complexes are designed via a versatile approach, including Gd3+ chelates linked to DPA derivatives, which possess an appropriate affinity for Zn2+, through spacers of different sizes. Our aim is to decipher the microscopic parameters governing the Zn2+-dependent MRI response of these systems allowing their further optimization. These complexes have an optimal response at intermediate magnetic fields but thanks to the FFC-MRI technique (Fast-field-cycling MRI, collab. H. Scharfetter, Gräz Universität, Austria), we could detect Zn2+ at higher fields, where the resolution is better (Chem. Eur. J. 2014, 20, 10959 – 10969 ; Coord. Chem. Rev. 2018, 369, 91 ; Pharmaceuticals 2020,13, 436 ; Chem. Eur. J. 2019, 25, 8236-8239).

Peptidic systems for Zn2+ detection. Zinc fingers are small protein domains which complex Zn2+ with high affinity and good selectivity vs other physiological cations. The peptide folds upon Zn2+ and becomes more rigid. By cleverly linking a Gd3+ chelate to this peptide, we obtained the first peptidic MRI contrast agent sensitive to Zn2+, which was successfully used for MRI detection of Zn2+. Thanks to the presence of a Tryptophan, which acts as an antenna to sensitize the luminescence of Tb3+, a bimodal contrast agent is obtained (Chem. Commun. 2018, 54, 7350-7353, collaboration O. Sénèque, LCBM Grenoble). 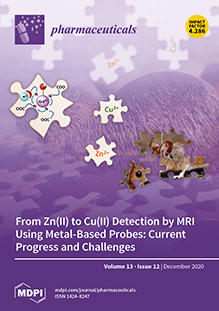 Quantitative detection of Zn2+. The quantification of any physiological parameter by MRI is complicated as it is necessary to know the local concentration of the contrast agent, which is not possible in vivo. We have decided to combine MRI (responsive technique) with SPECT (Single-Photon Emission Tomography ; quantitative technique) by using a radioactive Ln3+, which enables a similar biodistribution. In collaboration with I. Da Silva (CEMHTI, Orléans), 165Er was produced in a cyclotron and separated from its father element (Ho), which is of paramount importance for a reliable quantification. It was the first time that 165Er was produced in France. By using a cocktail of Gd3+ and 165Er3+ adapted to each technique, a contrast agent sensitive to Zn2+ and a calibration curve, the in vitro proof-of-concept of Zn2+ quantification was performed. It was the first quantification method for physiological cations and this work was highlighted by Chem. Comm (Chem. Commun. 2018, 54, 7597-7600 ; collaboration I. Da Silva, CEMHTI Orléans and J. Sobilo et S. Lerondel, CIPA, Orléans).

Enzyme-responsive MRI agents. We work on MRI probes containing a self-immolative linker between the Ln3+ complex and the enzyme-specific substrate. Enzymatic cleavage initiates an electronic cascade that leads to structural changes in the complex, with concomitant relaxivity or PARACEST response. This platform has been extended to optical detection by incorporating a pyridine chromophore in the ligand and constitutes the first example where a single molecular system can be used as a responsive imaging agent in three different independent modalities (T1-weighted and Chemical Exchange Saturation Transfer MRI, optical imaging). These results have been recently published (J. Am. Chem. Soc. 2016, 138, 2913−2916) and highlighted on the cover of JACS (collaboration with P. Durand, ICSN, and S. Petoud). 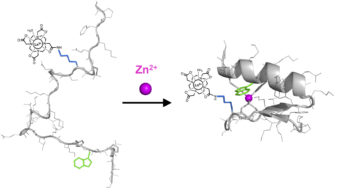 Detection of amyloid peptides. We have been long interested in benzothiazole-derivative macrocyclic complexes for multimodal imaging of amyloid peptides. Recently we evidenced that nanomolar binding affinities, unprecedented for a metal chelate, are possible to attain with both Ab1-40 and amylin when the amyloid recognition unit is separated from the chelate by a long, hydrophobic C10 spacer. We also evidenced that different binding affinity regimes exist in solution as a function of GdL concentration, related to the presence of different micellar aggregates, and micellar aggregation of metal chelates should always be kept in mind when interactions with amyloid peptides are considered. (coll. C. Geraldes, Coimbra; C. Hureau, Toulouse, Chem. Eur. J. 2021, 27, 2009 – 2020, Nanotheranostics, 2018, 2, 168-183).

Theranostic probes. We are combining MRI and photodynamic therapy via molecular or nanoparticle approaches. Gd3+ chelates were conjugated to porphyrin-photosenzitizers, some for two-photon excitation. We showed that their chemical association can be beneficial for both the relaxation properties and the photosensitizer (collab. V. Heitz, Strasbourg; Chem. Eur. J. 2016, 22, 2775–2786, Inorg. Chem. 2016, 55, 4545–4554; Bioconj. Chem. 2018, 29, 3726−3738, Inorg. Chem. 2020, 59, 14389−14398). In a proof of concept X-ray induced PDT study, we took advantage of the X-ray excited luminescence of lanthanides to locally generate light in a micellar system comprising amphiphilic Ln-chelates and integrating hypericin as photosensitizer in its hydrophobic core. This circumvents intrinsic depth limitations of PDT and could be synergistically combined with classical radiotherapy and MRI tracking of the probe (collab. M. Réfrégiers, Nano Research, 2015, 8, 2373-2379). 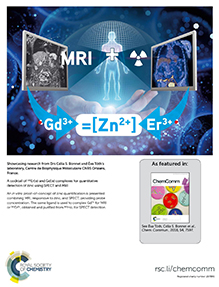 Drug-loaded liposomes are typical examples of nanomedicine. We have shown that doxorubicin, the anti-cancer agent in the liposomal drug Doxil®, can sensitize Ytterbium (Yb3+) and generate its near infrared (NIR) emission. When doxorubicin and amphiphilic Yb3+ chelates are incorporated into liposomes, the sensitized emission of Yb3+ is dependent on the integrity of the particles which can be used to monitor drug release. We also demonstrated for the first time that the NIR Yb3+ emission signal is observable in living mice following intratumoral injection of the Yb3+-doxorubicin-liposomes, using a commercial macroscopic setup equipped with a near-infrared camera (coll. S. Petoud, C. Pichon, CBM, Angew. Chem. Int. Ed. 2021, 60, 23574-23577).

Targeted probes for multimodal Imaging. We are also interested in the development of peptide-based imaging probes that specifically target proteins which are biomarkers of early stages of disease. These proteins are often overexpressed, and thus ideal targets for imaging. In a nanoparticle approach we showed that gold nanoparticles simultaneously decorated with Gd3+ and the radioisotope 67Ga, and carrying a bombesin, can be internalised by PC3 prostate tumors in vivo. Their Gd3+ content enables their detection by MRI, but also promotes therapeutic features together with gold via radiosensitisation (coll. MP. Campello, Lisbon, Materials 2020, 13, 513).

The MRI activities focus on preclinical research at high field (7, 9.4T) including morphological, perfusion, diffusion studies, angiography, susceptibility weighted and CEST imaging. A major force is our specific expertise in in-house design and construction of dedicated RF coils, conception/optimisation of pulse sequences and image analysis (texture analysis). Our MRI studies aim on characterizing cerebral, pulmonary, muscular and hepatic tissues in small animal models of inflammation, trisomy 21, malaria or cancer and on assessment of chronic brain exposure to environmental xenobiotics (pesticides, bisphenol A). For in vivo spectroscopy, we develop 1H or 1H observed-13C edited sequences to monitor brain or liver metabolism.

This study is part of a collaborative project with Guerbet France (specialist in contrast agents for MRI, Aulnay sous Bois), and more specifically V. Vives and P. Robert.
Since 2014, numerous studies have shown that repeated injections of gadodiamide (Omniscan®, General Electric) and more generally of all Gadolinium Based Contrast Agents including a linear ligand (as opposed to macrocyclic ones) induce late hypersignal in the deep cerebellar nuclei (NCP) on T1-weighted images in humans and small animals. 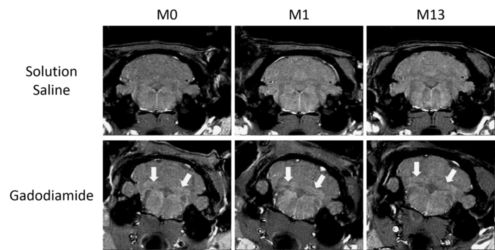 This hypersignal is correlated with the presence of gadolinium, and we demonstrated that repeated injections of gadodiamide result in gadolinium retention in NCP one year after the injections. As shown by SRM, this retention doesn’t induce significant changes in the brain metabolism or histological alterations.

Prognosis of glioblastoma is very often bad, which can be explained by several reasons: late diagnosis, post-surgery recurrences, resistance to chemotherapy, tumor heterogeneity or even difficulties to distinguish post-surgical necrosis from disease progression.
Early diagnosis can be improved by MRI using specific or non-specific contrast agents in order to improve contrast between the tumor and surrounding tissues as well as between the different part of the tumor (oedema, necrosis, blood). These contrast agents injected intravenously will be effective if the tumor is well vascularized.
Successful therapy implies that the drugs injected can reach the tumor, which is easier if the tumor is sufficiently vascularized. We are interested in the vascular (perfusion MRI, angiography) and tissue (diffusion MRI, texture analysis) characterization of glioblastoma during its development.
A preliminary study was carried out on a subcutaneous xenograft model of glioblastoma (U251MG cells)

Diffusion MRI, angiography and perfusion revealed tumor homogeneity in the early phase (up to week 7 post tumor induction) and heterogeneity at a later stage (from week 10-11) of the development, with the appearance of central necrosis and blood. There is also peritumoral vascularization with permeable blood vessels

TIEG1 gene "TGFb Inducible Early Gene 1" also called KLF10 was discovered by a team from the Mayo Clinic (Rochester, USA). They showed that this gene is involved in the morphological and functional properties of bone and tendon tissue. We used diffusion MRI as well as 1H AND 31P MRS to study the role of KLF10 in motor and brain functions. 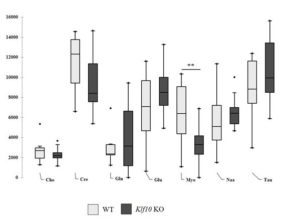 We have thus shown that Klf10 plays an important role in the function, structure and metabolism of the cerebellum in mice. Based on our previous studies where we analyzed the role of Klf10 in skeletal muscle, we hypothesize that Klf10 is an important regulator of energy metabolism in mitochondria. However, the mechanisms by which Klf10 regulates these processes in these tissues have not yet been elucidated.

Mariano Gago prize awarded to the collaboration between the group of Eva Jakab Toth and the University of Coimbra, Portugal

The first molecules which really prefer manganese(II) over zinc(II)

A new luminescence for the direct follow-up of drug delivery